Three versions of the play, radio trilogy and documentary film have gradually emerged under the title Rabínka - Woman Rabbi. All to a certain extent are based on Anna Grusková's original play, but the author continued to work on them, enriched them with new themes and documents. All these versions were staged and presented in various media in Slovakia and abroad.

In the beginning, there was Anna Grusková's play Woman Rabbi about the Jewish activist Gisi Fleischmann. It won the 2nd prize in the Drama 2006 competition and was published in the Theater Institute in Bratislava. For the first time, it was staged by the Italian Reon Theater in Bologna in 2010. Shortly thereafter, the three-part radio documentary Rabínka was created, enriched with more documentary material from Israel and Slovakia and realized in the Slovak Radio. Finally, Anna Grusková wrote an extensive theatrical version for the Slovak National Theater (published in Glosolália magazine 3/2013). Director Viktorie Čermáková transformed it together with the literary advisor Matej Samec in the productrion that was staged in the Slovak National Theatre in 2012.

The premiere of Anna Grusková's play Woman Rabbi was in March 24, 2010, in Bologna, in the Reon Theater, directed by Fulvio Ianneo. The main character was played by Anna Amadori (on the photo, in the foreground). The scenes from this production were used in the Anna Grusková´s documentary film Woman Rabbi.

"Anna Grusková, the author of the play, does not at all cheer Gisi Fleischmann, she also points to her shady pages, and reminds that big ideas also require great sacrifices."

The main character was Ingrid Timková (in the photo) and Halka Třešňáková.

Short documentary about the staging and its creators.

The radio trilogy Woman Rabbi by Anna Grusková was initiated and broadcast on the Slovak Radio in September 2008. It represented Slovakia at the international Prix Europa competition in Berlin and was also broadcast by the Czech Radio "Vltava" in November 2008.

The premiere of the radio version in Italy was broadcast on January 22 and 26, 2010 on the Radio Citta del Capo in Bologna, directed by Fulvio Ianneo. 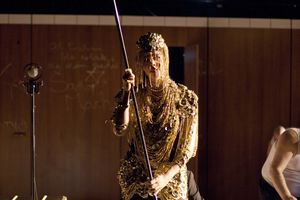 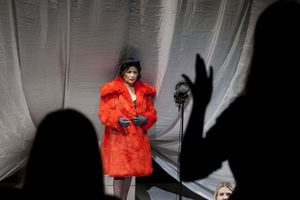 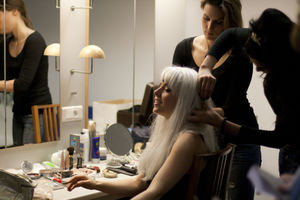 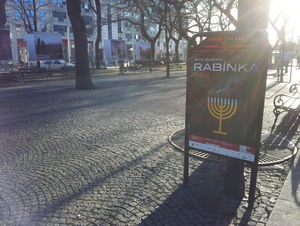